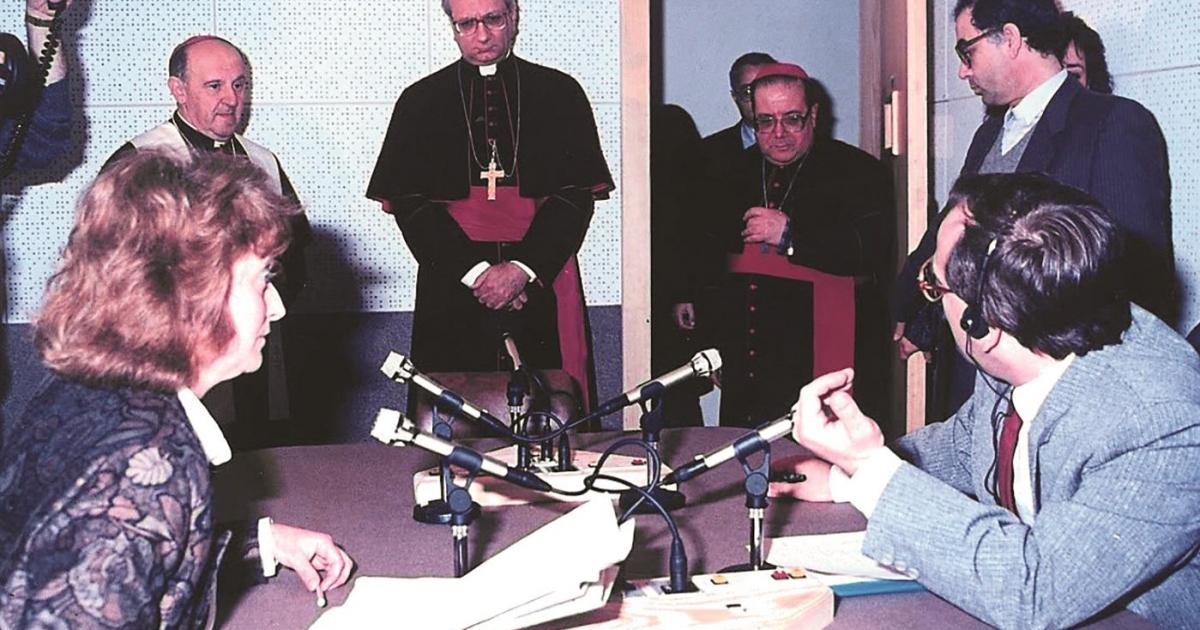 March 14, 1992. I remember that day like it was yesterday. Bishop Joseph Mercieca, accompanied by Bishop Nikol Cauchi, inaugurated RTK, the Church-owned radio station.

At least since 1986, the Church had expressed a desire to own a radio station. So when in 1990 Prime Minister Eddie Fenech Adami proposed a radio frequency, you would have thought everything else should have been simple. It was not. Questions about the radio’s format, its funding and its relationship with the Diocese of Gozo had to be ironed out.

Bishop Mercieca launched a broad consultation process during which two models were presented. One was religious radio in the strict sense of the term. The other was a Christian-inspired all-format station. The first most often presented a direct religious content, the second inserted the Christian ethos as leaven in various programs. The second option received overwhelming support.

In the Diocese of Gozo there were those who preferred to go it alone, supporting a station in conjunction with a leading bank and ministry. They had not yet discovered that the Broadcasting Act made this option legally impossible. The first meeting with a delegation from the Diocese of Gozo failed. But the project is quickly on track following a meeting with Bishop Cauchi.

A committee of seven people representing the Archdiocese of Malta, the Diocese of Gozo, men and women religious, laity and parish priests has been set up. This paved the way for the establishment of the Board of Directors, which I had the honor of chairing.

The financial dimension was more difficult to break, until someone had the idea of ​​offering participation to parishes, religious orders and lay associations. This crowdfunding exercise also served to strengthen the sense of belonging within the Catholic community.

Some wanted to name the station Radju Gabriel while others offered names in Latin such as Onda Aeries. All would have defeated the goal of having a low definition Christian radio station. The late George Fava coined the name RTK. Three letters that could stand for anything from ‘radju ta’kwalità‘ (quality radio) to – according to the ‘bad languages’ – ‘radju ta’kafkaf‘ (poor quality radio). The slogan chosen was ‘Radju ta’ kulħadd‘ (radio for all).

George Pollacco (second from right), the station’s pre-start tech crew chief, with the station’s techs and DJs. Father John Avellino (far left) was a journalist and later president of RTK.

In September 1990, Bishop Mercieca told a press conference that the Church had accepted the offer to have a radio license and stressed that the station should shed gospel light on the unfolding events. around us. The management team took this direction to heart and RTK’s news, current affairs and talk programs were programmed as the heart of the station.

Joe Brockdorff (second from right), owner of BPC, presenting the Journalist of the Year award to Father Joe Borg, editor and president of RTK. Carmel Attard (right) served as the station’s first news director. Second from left is Sylvana Debono, RTK News Director from 2000-2004 and Church Media Editor from 2016-2021. At left is Roderick Agius, then a RTK reporter.

RTK’s newsroom collectively won the 1995 Journalist of the Year award for its investigative reporting on a Labor MP who used to send women for abortions to Sicily, a consultant from the PN government which was under investigation in Sicily and a minister whom we accused of having violated the ministerial code of ethics.

“For the first time in years, the vast majority of the station’s audience is now under 50”

And yet the Labor Party has consistently campaigned against RTK, claiming the station is biased against it. All of the defamation actions we have taken to defend ourselves have been won. Ironically, the only time under my leadership that RTK was found guilty by the Broadcasting Authority (BA) was for airing material supporting the PL government before the 2017 election campaign.

The station quickly became the second most listened to radio station in Malta. When I left the station in early 2000, according to an October 1999 BA survey, RTK had attracted an audience of 53,000 listeners.

Over time, the radio scene changed. RTK began to reach fewer people and, as Radju Marijamainly affected the over 60s and 70s.

Arthur Caruana, the first channel manager of 103 Malta’s Heart, the radically rebranded RTK, as well as the presenters of the breakfast and morning shows.

In 2018, Beacon Media Group, the name of the Church’s owning media company, began a consultation process with the bishops to plan the station’s future. This led to its radical rebranding to ‘103 Malta’s Heart’ in July 2019. The main aim of the reform was to build an audience under 50; a task easier said than done.

Archbishop Charles Scicluna with workers and presenters from 103 Malta’s Heart and Newsbook on the inauguration of the new studios in September 2019. On the Archbishop’s left is Gege Gatt, then Chairman of the Board of Beacon Media Group (owner of Church Media), while Fr Eddie Zammit (right of the Archbishop) has been director since 1992. On the far right are Anton Attard, then CEO, and Kevin Papagiorcopulo, the current editor in chief of Newsbook and 103 Malta’s Heart. PHOTO: CHURCH.MT

This is now done since, for the first time in years, the vast majority of the station’s audience is now under 50 years old. The audience size recorded in BA surveys is always lower than desired, but today there are other ways to measure adoption in addition to this survey.

Some myopes would be tempted to abort the experiment. It would be a mistake. The way forward is to continue the reform initiated in recent years. Digital makes it possible to break the mentality in silo of the various platforms, which prevailed in analogical technology and the mentality which it generates.

The way forward should not be to downsize the organization, but to make maximum use of all content across all platforms. Such openness requires adequate investment and sufficient time to mature. Radical media reforms do not happen in a hurry.

Independent journalism costs money. Support Times of Malta for the price of a coffee.

Carrier consolidation is a factor in exorbitant shipping costs