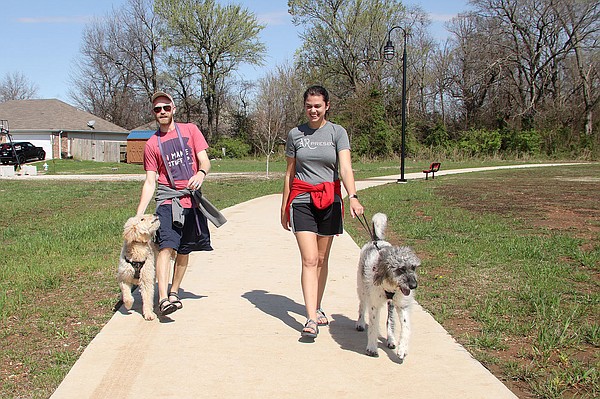 SPRINGDALE — Cities and counties in northwest Arkansas began vying Thursday for a share of nearly $19 million in federal funds the region is set to receive next year for road and trail projects .

The money, based on area population, is administered by the Northwest Arkansas Regional Planning Commission.

The programs provide for an 80% federal share and a 20% local counterpart.

There are more requests than money available. Applications will be reviewed and recommendations will be made to the Regional Planning Policy Committee for approval next month, according to Tim Conklin, assistant director for regional planning.

The money would allow small towns such as Farmington and Centerton to connect to larger trail networks in northwest Arkansas.

Farmington, for example, is asking for $687,700 to extend Creekside Park Trail to the city’s easternmost boundary with Fayetteville. Centerton is asking for $500,000 for McKissic Station Park Trail, Phase II. Centerton eventually hopes to connect to the Bentonville trail system.

Aaron Boehmier of engineering firm Burns and McDonnell said Farmington is considering a sub-1 mile connection to join the Fayetteville trail system. It’s a small project, but there’s a bigger picture, he said.

Boehmier said Farmington is also working on a central loop of trails in the city, which could eventually be part of a west trail to Lake Wedington.

Springdale is asking for $7.2 million to help extend Don Tyson Parkway west to Arkansas 265 where a roundabout is planned. The money would be used to build the four-lane road. The project received a total of $1.5 million in 2021 and 2022.

Fayetteville is requesting $1.8 million to help add sidewalks on College Avenue from North Street to Sycamore Street and to improve crosswalks, driveway consolidation and other work. The work is part of a project expected to cost approximately $6 million.

Fayetteville is also asking for $500,000 for bicycle and pedestrian accommodations as part of planned improvements to the Interstate 49 and Martin Luther King Jr. Boulevard interchange. The city is still working with the State Department of Transportation. ‘Arkansas on the planning and design of the proposed improvements, which are expected to begin in 2024.

Fayetteville also wants $320,000 for right-of-way acquisition and environmental work as part of intersection improvements in the Millsap Road, College Avenue and North Hemlock Avenue area, a congested area on the north side of town. This is part of a project to extend Sain Street into Millsap, allowing traffic to bypass College Avenue and also access an existing flyover to reach the Fulbright Freeway and I-49.

Centerton is also asking for $600,000 for a side road along Arkansas 102, part of a planned expansion of the road by the Department of Transportation. The city wants a wider side road than the state will pay for.

Cave Springs is seeking $348,000 for sidewalk extensions on North Wallis and Sands roads. The sidewalks would join the Rogers sidewalks.

Gravette is asking for $725,000 for phase II of its trail network. The plan is to connect Pop Allum Park to local schools.

Siloam Springs is seeking $184,000 to help with what would ultimately be a 10-foot-wide side road along Progress Avenue.

Bella Vista is seeking $326,845 to extend the Razorback Greenway along Mercy Way and build a bridge. Construction is underway. The project has already received $5.3 million.

Lowell’s big ask is $1.7 million for costs associated with the Monroe Avenue extension from Oak Street to Arkansas 265.

Lowell is asking for $240,000 to help cover rising construction costs for a project to improve the intersection at US 71B and Arkansas 264. The project received $730,000 last year.

Lowell is also asking $560,000 for a roundabout at Arkansas 264 and Bellview Road. The project is in partnership with the State and is scheduled for 2024; he received $900,000 over the past two years.