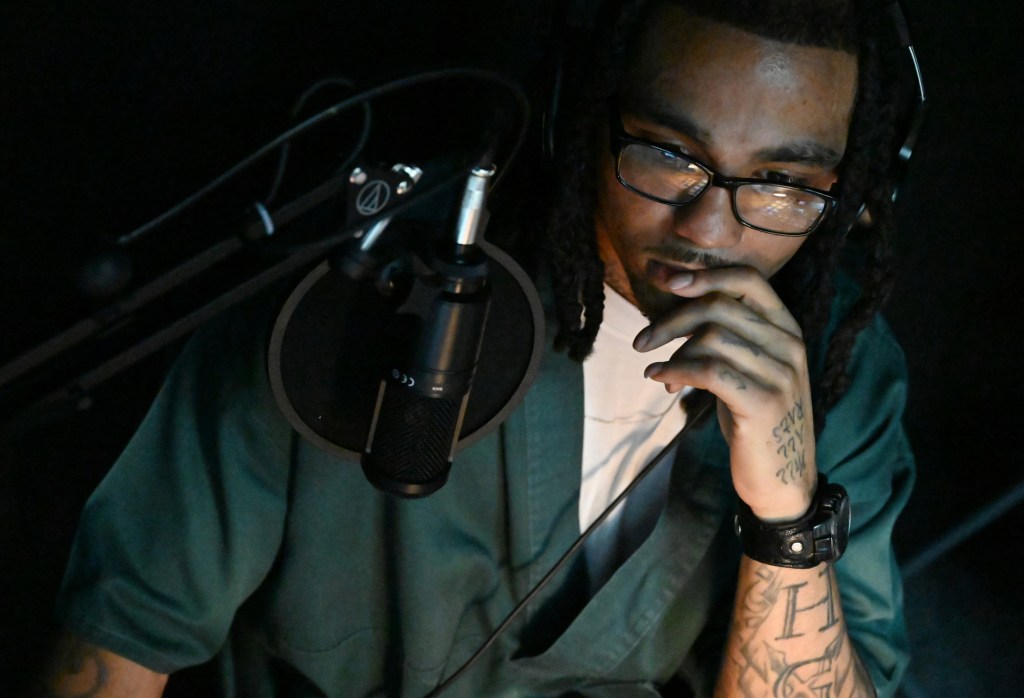 “Launch Day!” shouted a producer as the staff cowered in front of the microphones, a palpable hum permeating the windowless room. Large white posters hung on a nearby wall detailing the new station’s mission, values â€‹â€‹and impacts.

“In an artistic space”, said a poster, “there are no failures”.

It’s not Colorado Public Radio or Hits 95.7. This is Limon Correctional Facility, a sprawling Level IV prison in the Eastern Plains of Colorado that houses more than 700 inmates behind a 4,000 foot long double perimeter fence.

Inside plexiglass walls, surrounded by soundproof foam, a collection of giddy men in green jumpsuits presented on Tuesday Inside Wire: Colorado Jail Radiothe first nationwide radio station in US history to be recorded and produced inside prison walls and broadcast to anyone with an Internet connection worldwide.

“Returning to the community makes us worth again as human beings,” said Anthony Quintana, 51, who has spent the past 33 years behind bars for murder but has been invigorated by his new role as engineer and director of operations for the burgeoning radio station.

The program’s goal is to change the narrative of the more than 14,000 people housed in Colorado prisons.

The idea had been in the making for a year and a half, born in the depths of the COVID-19 pandemic. In November 2020, DU and the Department of Corrections launched A/LIVE inside, a virtual showcase for incarcerated artists and storytellers to share their work from Colorado prisons. Program staff realized they could use the closed-circuit system inside the prisons to broadcast the event.

“We thought, ‘What else could we do? ‘” Hamilton said. She pitched the idea to Dean Williams, executive director of the Colorado Department of Corrections.

The head of the state’s corrections system took office in 2019 with a reform-minded vision, promising to “normalize” life behind bars. Williams lit green podcast registered in Colorado prisons, as well as an inmate managed newspaper and a traveling production of “Flight over a cuckoo’s nest.â€

Colorado Prison Radio, Williams told the Denver Post, is a continuation of that normalization movement.

The executive director appeared on Tuesday’s kickoff show and plans to appear on a weekly show called ‘Up to the Minute with Dean Williams’, in which incarcerated residents will talk to him about anything and everything.

The station, funded by the DU Prison Arts Initiative, operates 24 hours a day, 7 days a week, and includes musical programs, conversations between inmates and corrections staff, and an audio message board for Department residents. correctional services.

The station is not actually broadcast on AM or FM radio, but may be streamed in line or via the inner wire application. It is also broadcast to every cell in Colorado’s 21 correctional facilities via closed-circuit televisions.

Jody Aguirre, 58, had never played with audio until he signed on as Inside Wire’s engagement producer and host of a Tuesday morning music show.

He first went to prison in 1994 for murder and served a stint in solitary confinement. There is no release date on the horizon.

“When you come here you lose hope,” Aguirre said.

But after spending 10 years angry and bitter, Aguirre made a promise to his mother: “I will live to make her proud.”

He took a creative writing course, and now he mixes 80s new wave, deep house and jazz on his Tuesday radio show.

Herbert Alexander, 46, can’t stop talking to his family outside the new radio station.

The rumor mill inside the prison is strong, he said. So Alexander, who is the production manager of Inside Wire, is particularly excited about the show with Williams to give residents real information about new legislation or policies that affect them on a daily basis.

“A lot of guys don’t know about this information,” Alexander said. “We’re giving you Dean’s voice.”

Alexander has been incarcerated for 13 years for aggravated robbery and is eligible for parole within the next two years. He hopes to use his DU certificate in audio production to find work in this field once back outside.

“Most offenders go home at some point,” Alexander said outside the studio. “So when they do, don’t we want them to be better men?”

The incarcerated men gathered in a room after the show was taped on Tuesday, waving and shouting via video to their fellow radio hosts inside the Sterling Correctional Facility and the Denver Women’s Correctional Facility, where broadcasts will also be recorded and produced. (All shows are pre-recorded and reviewed before they hit the airwaves, though Hamilton says they didn’t have to remove content from any of the taped shows before this week’s debut.)

As he watched from the back of the room, Seth Ready became emotional. This project is personal to Ready, who spent 18 years behind bars but now works for the DU Prison Arts Initiative as a communications associate.

“It’s been one of the best days of my life,” he told the men and women on the video call.

Finally, it was time to hear the final product, the culmination of a year of work.

The intro music came on the computer and Quintana couldn’t help but laugh as she took a bite of her fruit salad. Cheers filled the prison library. Quintana waved her fist, smiling broadly. Hamilton let out a deep exhaled sigh.

Alexandre’s voice swept over the airwaves: â€œWe have a vision: To create something by us, for us.

Quintana shouted, “That’s the hook!” as he sang on the chorus: “Inside…inside…the wire!”

Alexandre soaks up the moment.

“Knowing that everyone can hear it,” he said afterward, “is like, wow.”