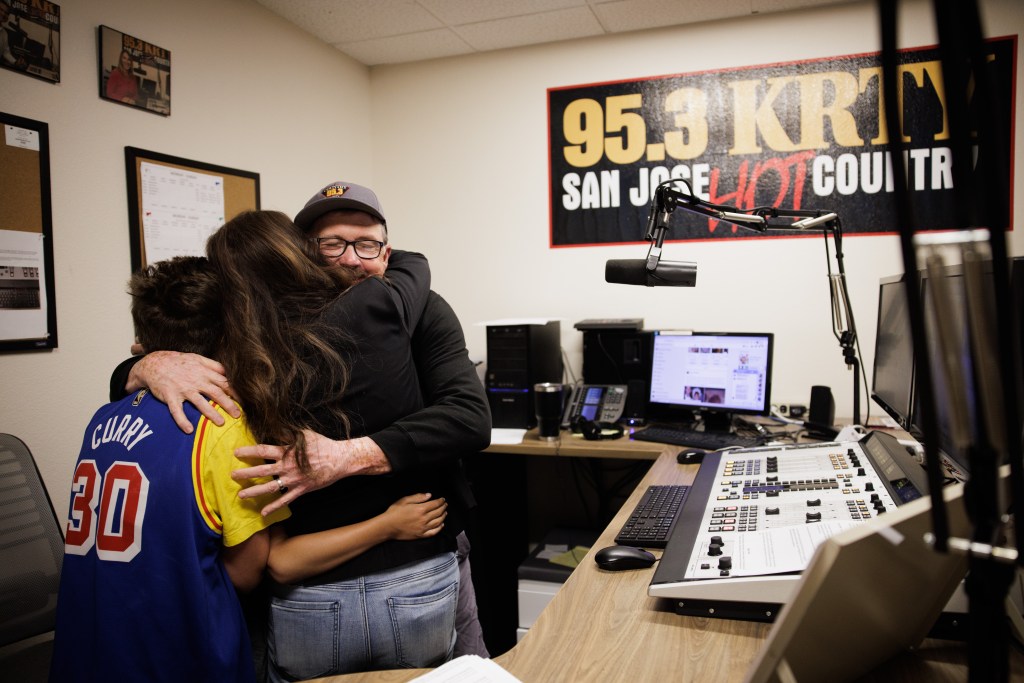 Local radio stations become part of the fabric of a community and listeners become like extended family members to the broadcasters. So there was a lot of emotion Friday at KRTY’s San Jose studio, which shut down shortly after 9 a.m. — its 95.3 FM frequency taken over by the Educational Media Foundation.

The last song to stream live was Brad Paisley’s “Welcome to the Future,” which was fitting since it wasn’t the end for KRTY. This is Silicon Valley, after all. After the FM signal was restored, the broadcast continued on krty.comas morning hosts Gary Scott Thomas and Julie Stevens presented a pre-recorded interview they did with country star Kenny Chesney.

“It’s not a funeral, it’s a graduation,” said Thomas, who was surprised by a gathering of family and friends outside the station after finishing the show. “We get our certificates and take it to the next level.”

The transition to online streaming was a hot topic — with plenty of memories — during a live panel discussion that morning with Stevens, Thomas, general manager Nate Deaton and hosts “Indiana Al” Breiten and Michael Moore . The station has a solid reputation in the country music community — it’s the No. 1 country station in the top 75 markets, Deaton said — and its listener base has grown beyond the Bay Area. on line.

Station staff are dwindling, but the full roster of hosts and others remaining on board will continue as unpaid volunteers for the next three months to see if listeners follow them. “So many people have come to us and said they’re so excited that this is the next step,” Deaton said, “and I think that’s the future of radio.”

KRTY has had a big impact off the air as well, and that will continue with events like its series at Clos La Chance, from concerts at Club Rodeo and KRTY Nights to San Jose Giants games. Thomas says he and his fellow hosts enjoy seeing listeners face-to-face at these events and are glad these are continuing even with KRTY off the air. “We have listeners who remember our first day on the air,” Thomas said, “and the good thing about streaming is now, if they leave the area, they can still listen to us.”

PRESIDENTIAL HEARING: In 1992, Larry Stone co-organized Silicon Valley’s first meeting with Bill Clinton, then governor of Arkansas and not yet a declared presidential candidate. Famously, Stone missed seeing Texas pitcher Nolan Ryan not hit the A’s that night, but started a friendship with the future president and later gathered a small group of Silicon Valley business leaders to meet him. in Cupertino. Clinton ended up with the endorsement of 32 Valley CEOs and business leaders.

Stone and Clinton’s friendship continues to this day, so it’s no surprise that when the former president was in San Jose for Norm Mineta’s memorial service this week, he wanted to see Stone and his wife, Carmen. . They hosted a dinner party at the Capital Club on Wednesday night with friends Dave and Joan Barram and Regis and Dianne McKenna.

MEMORIES OF A LIFETIME: Los Altos resident Janet Mosser was able to take a trip down memory lane last month when she was visited by Donna Santistevan and Dee Miller, the outgoing Regent and Secretary of the Los Altos Chapter of the Daughters of the American Revolution. They didn’t show up empty-handed either, bringing with them a framed certificate honoring Mosser’s 50 years as a member of the organization.

Mosser, 96, joined the team in 1972 and remembers visiting the DAR buildings in Washington, D.C., as well as the DAR Museum, which features 31 rooms furnished in colonial-era vintage style. and early America. She also remembers how special she found the chambers that recognized each state, especially California’s.

SUMMER MUSIC IN SAN JOSE: The return of the summer solstice on June 21 also means the return of Make Music Day San Jose, and this year the melodious celebration will take place in person for the first time since 2019. There’s a huge lineup of shows and events. activities, ranging from the jazzy hip-hop of the Francis Experience at the Mexican Heritage Plaza, to the Santa Clara County Fiddlers Association at San Jose City Hall, with plenty in between at venues such as Parque de Los Pobladores , Hammer Theater Center Plaza, Children’s Discovery Museum, Evergreen Branch Library, and SoFA Market.