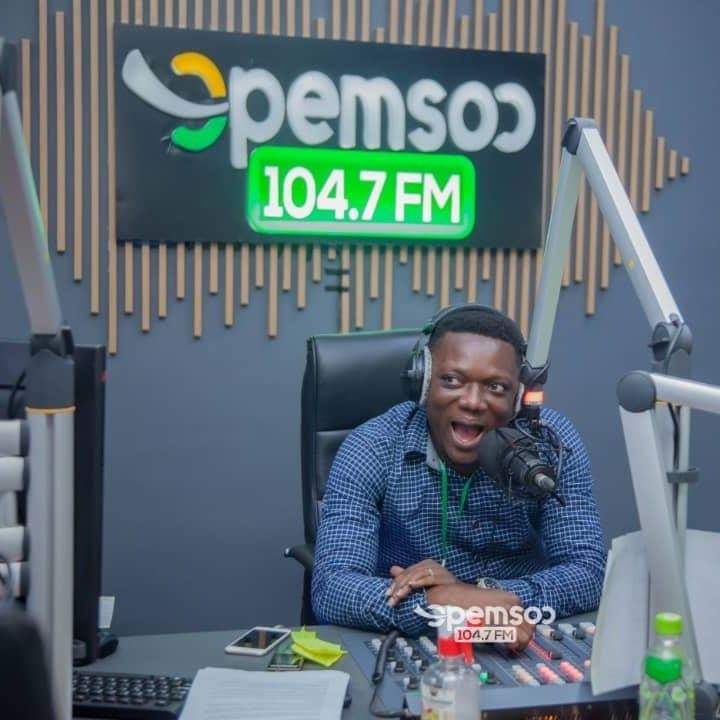 Broadcasters are in the business of educating, informing and entertaining their audiences. Some of these audiences hold their favorite presenters in high regard and wouldn’t take an issue seriously until they heard from the broadcasters of their choice. This makes the work of the broadcaster more or less like that of a preacher who announces the good news and shows the way to his faithful.

I have read and seen broadcasters who have used their console to make direct and indirect contributions to their listeners. The likes of Kwame Sefa Kayi, Yaw Adu Boakye, Captain Smart and a host of others; but another gentleman who has been in the radio business for over a decade and is doing well with his console and microphone is George Opoku Mensah aka Akwesi Agudey.

the loud, smart and articulate young broadcaster, George Opoku Mensah who would later gain traction with his alias Agudey; will impress many radio enthusiasts and critics with his witty and authoritative style of interviewing which will make him one of Ghana’s most beloved gems after radio.

The Assin Foso Demonstration Junior High School graduate nurtured his market radio dream from Assin Foso based at Nkwa FM as a news presenter and later at Arise FM where he again presented the news in style. Getting better, he moved to Dunkwa-On-Offin, where he settled at Dunkwa soro’s Solar FM as a sports presenter until he was approached by Obuasi-based Shaft FM. .

At Shaft FM, his interviewing skills and his edge on the news quickly took him from newscaster to morning show host and editor. He made the morning show one of the best in the Adansi, Denkyira and Amansie enclave. He spawned “Political Palace,” a news program that saw him interview political leaders on human-centered issues that needed answers for listeners.

Agudey left the studios of Shaft FM, based on Kamara Dini Street, when the applause grew louder. It was a blow for management, but the man had to tackle other difficult tasks. yes, it needed to enter a new market where competition was fierce and more was expected to keep it afloat.

From Golden City to Garden City

After his golden days in Obuasi and impacting young and old with his work, he was now in the garden city where he will be the morning man for Class media’s Kumasi FM as host of the ‘Kumasi Morning Show’.

Adum based Boss Fm needed a real “Boss” to handle Kumasi morning waves business and compete for listeners with other big brands and here is Agudey who has made progress with Kumasi Fm. At Boss Fm, he took over the main morning show, “Good Morning Boss”, and made it his own. As a newbie in the Kumasi radio community, his style won him more listeners and bounced the nearly dead Boss Fm.

Agudey made the once comatose ‘Good Morning Boss’ morning radio one of the most listened to; so he was again asked to host ‘Ghana Kasa’.

The Apam High School and Christian Service University College graduate took a break from the radio to focus on other personal matters until Manhyia Palace-based Opemsuo Radio needed a morning man to his new radio.

The competition was tough with household names pushing everyone to be the first to speak from the magnificent royal studios of Opemsuo and this time around versatile, smart and eloquent broadcaster Agudey was given the green light to run the affairs of the Opemsuo’s main morning show dubbed ‘Nkwantananso’

Radio hene, a name coined for him by his ardent listeners and panel members, is known for his nerve-wracking interviews with very big personalities. One such interview exposed the rot surrounding the 40-year-old KATH Maternity building and the misappropriation of COVID-19 funds.

His interview with the Vice President, Dr Mahamudu Bawumiah, where he got to rock it in Twi, was soothing to listen to.

He is one of the few broadcasters to have had the privilege of interviewing diplomats on his radio or at their homes. He interviewed Irene Vida Gala, former Brazilian Ambassador to Ghana, British High Commissioner Harriet Thompson and Anne Sophia Ave, current French Ambassador to Ghana, at his residence.

The icing on his cake was the interview with the President of the Republic, HE Nana Akufo Addo. It was an interview originally planned for 5 minutes, but with his great talent and his mastery of his art, he was able to make it 12 minutes.

George Opoku Mensah will continue to have his name written in gold in the Broadcasting Hall of Fame.