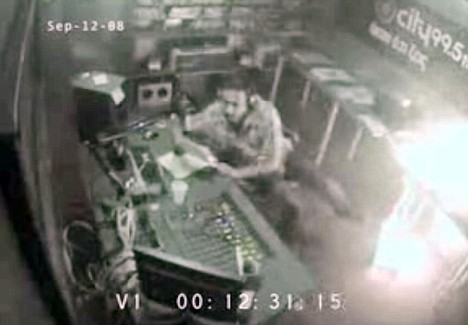 Show must go on: Greek DJ continues to broadcast as radio studio burns around him

Show must go on: Greek DJ continues to broadcast as radio studio burns around him

They say the show must go on – but what if your studio catches fire?

A radio DJ at Athens City station 99.5FM found himself in such a situation when during a live broadcast, which was also filmed for the Internet, his studio caught fire.

The filmed sequence shows how during his show, a fire broke out in a small trash can behind him.

Scroll down to watch the video

A fire, caught on video surveillance, broke out during a live Internet broadcast on the City 99.5FM radio station. But the imperturbable DJ serenely continues his show

It sets up quickly and spreads in closets.

At first, the presenter doesn’t notice it, but when the smoke and heat hits him, he turns around and tries in vain to stomp the flames.

Surprisingly, he never seems to stop broadcasting and continues to speak to his audience even when the studio is on fire.

Finally, a colleague arrives and helps put out the flames. What took them so long?